Back in March, Norwegian friends and SUP organisors Kjell and Eilen got in touch: “We’re looking at running some courses in the Lofoten’s, would you like to run them? The location we’re looking at is Unstad beach, a top surf destination in the Lofoten Islands, is that ok? ”

Just 3 short flights to get from Heathrow to the Lofoten airport in Leknes. I’m not sure if it’s better to do this than one long flight, I found the up and downs, with waits in between quite tiring.

Getting off the last little flight, I was picked up by Eilen. As we drove away we were greeted by amazing scenes of a undulating mixture of land and water. Deep fjords, lakes and mountains, set out in a sea of every shade of blue and green. All this within 20 minutes of leaving the airport. It’s such an unusual place that the 1st few days, I had to pinch myself to remind me it’s all real!

For example, the sun really never went down, it got to twilight about 12 and sunlight peeked through around 2am. Slept ok, but woke up briefly many times as the light changed through the “night”

This is very traditional Nordic area, small communities separated by large mountains or waterways. Quiet towns and villages set on or near the water, Whale stew, dried cod, brunost (Caramelised brown cheese) and dense multi grain bread were on the menu. They live off what the land and sea provide. 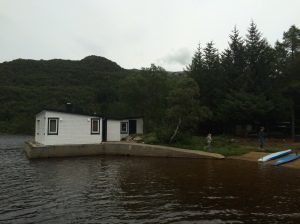 We started the training with the ISA SUP Open water module on Friday, focusing on Surf technical race skills at Unstad beach. Then after lunch, did some race start and buoy turn training on the lake Storfjordvatnet, being much easier as the water was a lot warmer than the sea and sheltered. You realise this area is a water sports mecca, you can paddle, sail and surf in such a variety of conditions.

On the Saturday and Sunday, ran an ILS/ISA rescue/1st Aid course assisted by Eilen as a trainee presenter. We had loads of fun, I especially learnt and clarified more about 1st Aid from Eilen (a Medical Doctor) and Tommy, who’s a former paramedic and head coach/owner of Unstad Artic Surf. 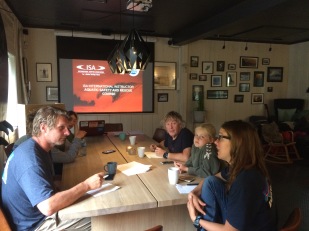 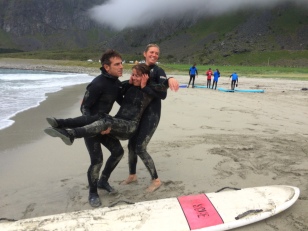 Rescue lift for Eilen with Mymy

On Monday, we drove 70-80km down the island chain to Å, passing the beautiful town of Reina, white sand beaches, waterfalls, and so many other jaw dropping sites, to drop off Eilen to catch the ferry to Bodo. 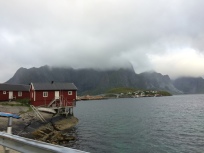 After breakfast I climbed the ski sloped mount behind Stamsund, where we were staying. It was quite a steep gradient with only 5km to climb from sea level to 400m. At this altitude, the wind picks up and the temperature drops, but your view unfolds and start to make sense of the complexity of the terrain. The weather is massively effected by this geography, you can be in bright sunshine one moment and then deep cloud the next. The Island mountain change and the gulf stream also create a temperate climate. It’s hard to believe you’re on the same latitude as Greenland and closer to the pole than Iceland. Although the reminder comes when the clouds and wind swing from the North, the temp plummets to 10 or so degrees in the Middle of August to a chilly 8-10 Celsius! 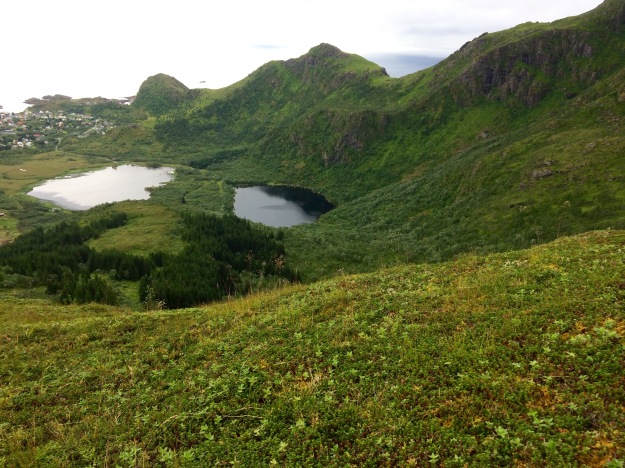 On Tuesday, Kjell took me up to Unstad for a last goodbye surf before heading back to England. It was really small, but had a nice soul session on a foam board for an hour or so.

Overall, an amazing trip. The surf wasn’t great, but there is so much more to do I didn’t care. But I’ll be back, maybe a winter or spring trip and take in the Northern lights too!!

Special thanks to Norwegian Sailing Federations https://norgesseilforbund.klubb.nif.no/Sider/Hjem.aspx Kjell and Eilen for offering this opportunity and hospitality. Tommy, Mymy and all the students and crew from Unstad Artic Surf http://www.unstadarcticsurf.com/ for hosting and taking part in the courses, the food and the fun:-)