Saturday 23rd August saw Dorset’s SUP club BaySUP battle it out with more than 130 competitors from 9 other clubs at Eton Dorney’s Olympic Rowing venue to defend and win, for the 2nd year running, the title of UK National SUP Club Champions.

BaySUP is a cauldron of sports development for the sport of SUP on the South Coast and we are fortunate enough to have in our membership some of the UK’s top paddlers such as Sam Ross, Pete Holliday, Jo Hamilton-Vale, Ryan James, Mark Slater and many others. As you can imagine having such a selection to pick from, we had a very competitive team, but would it be enough to defend and hold on to last year’s title?
Eton Dorney is a great facility and we were fortunate to arrive with clear (ish) skies and good racing conditions. 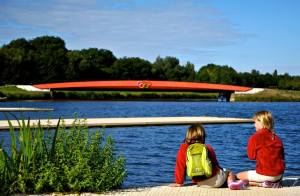 It was an all-day event starting with the XO and Junior races to start the morning followed by the race classes. First up were the XO (cross over-surf shape) boys with 3 minutes wait then the girls start. They had to complete 2 laps of a course set up around the recovery and main lake (6km). The wind had been building throughout the morning to give competitors a pretty brutal headwind on one leg and a slight cross tailwind on the way back. Amazing to watch the start as Warren Rowe, our one and only XO male, shot off like a gun and led the field by a hefty margin for the entire race. Our 1st Lady over the line was Tamsin Woodland in 6th Place and 2nd lady overall.
Both are SUP newcomers, Warren hasn’t even got a board and has only been out on one a few times.Tamsin has only been a member for a couple of months and been to only one training session!

Whilst this was on, the Juniors were battling it out in technical (round a course of buoys) heat and a final. They were a very competitive bunch, a sign of the development of the sport and positive sign of things to come. Another great result for BaySUP in the form of Sam Axeford coming 1st followed by Sam Thomas and Julius Wright of Bray Lake, with our other young frother David Riste coming in 8th.

Next up was the race board class, 3 times round the same course (7.1km). The starting order of the day was the 14’ Men, followed by the 12’6 Men, 14’ Women and finally the 12’6 women, each with 3 minute intervals between. Didn’t see much of the racing at the front of the 14’ Men (too far back!), but was pleased to hear we had some great achievements. Mark Slater came 2nd overall behind Ben Paine (Bray Lake) and 1st in Masters and just behind him Scott Brown (2nd Open and 3rd overall) and Will Vincent (3rd Open and 4th Overall). Many more good results and personal performances, especially Barry Short with a 3rd in the Masters to top it off!

The 12’6 Men’s had an exciting and close start. Ryan, Mo and Charlie Grey (Lagoon-Hove) and I flew off the line and sprinted under the bridge to the first turn. Straight into the stiff head wind, we formed a draft train which collected 9 people in total, with BaySUP’s Charlie Gridley on the end. We battled up the first straight, changing positions, slowing, sprinting, blocking-a real tactical battle. Ryan slowed down and Charlie Grey (CG) took the lead……only for a second, then Ryan burst out of the pack with me and CG chasing him. I fell in behind CG and drafted till the next corner, then thought I’d put the hammer down. Managed to pass him just before the turn, and then come round the corner into the downwind section. I rode the bumps well, getting out of the wind shadow close to the bank and made good progress. I found out later from CG that this is where Ryan and I started to take and keep the distance from the draft train behind. The rest of the race for me was a case of keeping up the pace and chasing Ryan, flying off into the distance. On the finish I was shattered but so proud, I’d come 2nd overall and secured the Masters 12’6” Division win!!!

After catching my breath and chatting to the Ryan and the previous 14’ finishers, I turned to look round at the very tight finish of the draft train for 3, 4, 5 and 6th Place.

14’ Women race was well represented; with fellow team members Laura Febery and Fay Roxburgh coming 4th and 6th in the open respectively. Lastly and certainly not least, the 12’6” ladies was well contended, with Jo Hamilton-Vale coming 1st overall and 1st Masters and Venecia Mankarious 5th overall and a 3rd in the open!
We all stopped for a bite to eat and drink, then tried to pick teams for the relays– everyone was pretty tired but 8 of us took on the challenge. All race class competitors were to be on 12’6 boards and the XO class on surf shapes, each team had to be made up of a mix of categories. Lots of cheering and laughs, we amazingly came in 1st XO class and 2nd Race class! Great efforts by Will Littleboy, Sam Axeford, Tamsin Woodland to name a few.

After a bit of a break for a chat and to pack up whilst the administrators total up the scores saw us through to the prize giving. Lots of podium spots and applause led to the big one-Who are the Club Champions! An amazing result for newly formed club Wet n Dry from Essex with 3rd overall and by only a 4 points margin between 2nd and 1st ……Bray Lake 2nd and yesssssssssssss!! BaySUP 1st!
We’d done it, but only just-something to think about for 2015.

Sorry to all I didn’t personally see racing on the day and to all you I didn’t mention, but I want to congratulate all the paddlers on your personal achievements and efforts to make this day a great team racing and social outing.
To the BaySUP crew:-I was extremely proud to be club captain and felt all the time we all put in to make the day a success was more than worth it. Well done Bay SUP crew, you have a real Aloha and Ohana (family) spirit!!
Lastly, big thanks to…………Hayley for the sports massage and laughs (you’ll have to join and paddle soon!!), BSUPA, Sam Ross for running the racing (and the highly amusing demonstrative race briefing!), Jo Hamilton Vale, Ali Pereira, Bray Lake and Windsor and Maidenhead SUP club for the scoring, admin and hosting the event (again!) and to the other clubs for racing and fond memories..
…..see ya next year!!

2 thoughts on “We’ve only gone and done it again!”