Hi peeps, I’ve got a confession. Yes I’m afraid I’ve travelled to the dark side of SUP………….

Just been over to the Isle of Wight (IOW) last week-no, not that dark side! I tried out the 2015 Red Paddle 14ft Elite INFLATABLE race board (ISUP), shock! Horror!

No, in all seriousness, I was pleasantly surprised! 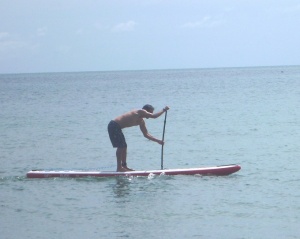 The first day I took it from Totland bay on the west coast of the island, round to Alum bay, then to the needles and return-a challenging trip 6 mile or so trip with 15mph SW. A lot of bumps due to the wind and water movement round the IOW.

Pumping the elite up was a breeze with the new titan pump. A new combination pump with high volume/low pressure cylinder and a high pressure/low volume cylinder gets the board filled quickly. Once the pumping gets hard due to board pressure, simply remove a valve which selects only high pressure system to work, making it easy to bring up the pressure. Could have pumped it even higher, but wanted to go paddle! Had a bit of trouble inserting RSS so suggest filling, but not pressurising the board and wetting the baton’s first to lubricate them before you insert them.

One of Red Paddle Co.’s objectives is to create an inflatable that can compete with hardboards for racing and I think in choppy open water they damn as near have. The board flex absorbs the fore and aft chop and round rails allows the side bumps to pass by without the board catching. In fact, when the bumps are coming from lotsa directions, the Elite seems to perform better than hardboards (I think I could come under flak for writing this, but Sam Ross has won 14ft races at a few national events on an elite in very choppy conditions).

On the second day I took it out at Shanklin bay on the east coast of the island, joined by friends. One of them Adey, is a keen kite surfer and sailor, 85kg and paddles only a couple of times a year, probably only when I’m around and make him! He managed to stay on (most of the time!) for a good half an hour and loved it, so perhaps not too bad for the heavier rider. Overall I was well impressed with the whole system, especially the pump and the board’s solidness. One guy who was renting out water sports equipment and was a keen windsurfer, thought it was a hard board and couldn’t believe it was inflatable!

Flex in paddle boards is an undesirable characteristic for flat water, but having some seems to be desirable in moderate to big, bumpy open water.

I wanted an easily transportable SUP solution for adventure and overseas paddling and with the elite and a Red Carbon 3 piece paddle I’ve got it! The 3 piece paddles are heavier and have lower performance characteristics than most carbon one piece paddles, but it fits in the bag with the board (still with space for more gear), keeping it all in one place. Oh yeah, the carry bag’s awesome as well, wheels for flat surfaces and straps for backpacking on rough terrain. Although it’s not the lightest load to carry on your back, so be warned.

I seen the dark side side of SUP……….and although but I’m not staying for good, I’ll definitely be back!