“The (Icon) Classic course doesn’t come without its challenges. Morte-Point (French for Death Point) didn’t get its name without good reason! This headland has a dark history of ship wrecking on its sharp jagged rocks and should only be navigated at certain times of the tide….”  (Extracted from http://iconsports.eu/icon-classic-2015/ )

David Tidball (Tids) had been working behind the scenes on an idea to get SUP to piggy back the GB Ocean Ski events and he was successful with the Icon Classic Ski Race from Woolacombe to Combe Martin. He then invited SUPers from up and down the country. Challenging open ocean race? I’ll have some of that!!!

Caught up with the days paddling team round 9am on Sat 11th July. We had Kerry from Wales, PJ and Marie, Ollie and Damo from the Hayle Hood, Steve from Whitby NE coast Tids and Me from the South Central coast. Trevor from Weston had bust his shoulder so helped with safety and transporting the boards back from the finish-thanks mate!!!

Unfortunately, we weren’t allowed to paddle the full course which included the infamous Morte Point, to the organisers we were a relatively unknown quantity that had to prove themselves. We launched from Lee Bay around the corner, still a respectable distance of 13km. After the safety brief it was off to Lee, it was a lovely little bay to prepare and then launch from.

Equipment prep-OMG! I usually just wear shorts, maybe a hat if sunny and only put on a hydration camelback if over an hour and a half. Very different today as I now prepared and armed myself with PFD, quick release waist leash, whistle, waterproofed mobile phone, knife, long john wetsuit and of course the hat and hydration!!!! Note to self: soak in the sea before the race to allow for overheating….. 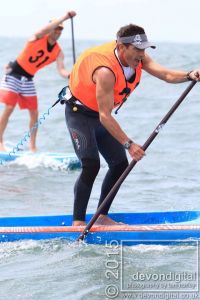 Me and Damo about to turndownwind.

Looking outside the bay, the sea looked fairly active with wind about 15-20 mph from the west with a touch of south in it. After a chat we lined up just after 1pm in the bay and…………….we’re off! Good start-3rd round the boat and……it’s downwind time!!  Just aimed at the furthest headland in the distance and got on with riding the bumps.The team of paddlers spread out pretty quickly then, the rest of the westerly leg I occasionally caught glimpses of orange dots. I followed Ollie who was miles in front, he’s really back in racing form, finished 15mins ahead of me in 1hr and 7mins. Awesome stuff! Great conditions for running, ocean swells one way and wind chop on an angle to it. Used both-the swells to push me along west and the chop to tack away from the cliffs. Wide open spaces, scattered cloud allowed the sun to spotlight the breath taking high steep cliffs and hills of the Exmoor coast; occasionally it also allowed views of picturesque hidden bays.

All the gear I was wearing was making me BOIL! As my core temperature rocketed and redlined I realised I’d forgotten to soak myself in the water before the race! I ended up having to jump off the board to cool down. As I learnt in Mexico your muscles stop working if you get too hot for too long! Paul hugged the cliffs and could see him to the side of me. I kept out further to sea and rode the bigger rollers and it looked like I was getting away from him……Too far away in fact, by the time I realised, I couldn’t get in close to round the final head of Coombe Martin’s entrance and hug the cliffs to keep out of the now cross wind! I was using the 17’6”ft ACE GT, kindly loaned for a try out by Paul Simmons and my ever supportive sponsors Starboard SUP UK. It is a super stable ocean touring and long distance machine, brilliant moving downwind once I got started, but it had so much weight I found it hard to accelerate and change direction on. I believe a big powerful rider would love it.

Ollie (L) and Paul (R)  flying away to 1st and 2nd respectively-paddling strong!

In all reality it was my lack of thinking ahead that lead to me watching Paul, Damo and Marie go ahead of me on the sheltered inside by the cliffs as I tried to fight the now cross wind into the bay (doh!). Putting this aside, I went in for a good fun 5th finish, with great support from the crowd. Always stoked to complete a great challenge and the scones, drinks and sense of belonging increased the good vibe! Us 1st 5 SUPers made it home before any of the Skis which hopefully proving that although slower than skis, we’re a safe and strong now known quantity to be considered as competitors for future events. Full results here: http://oceanski.org.uk/events/results/2015-results/race-3-icon-classic/

Great fun with day with lots of team spirit-it was more about sharing the adventure and experience than who came where. This continued at the prize giving with biscuit medals for the 1st three, made by the Tidball tribe and a nice scenic drive along the coast back with them to Woolacombe for food and a drink (or 2, 3, 4 or moreJ).

Thanks to everyone for making this an awesome event, especially Mark Ressel for letting us play (well done on getting 1st Ski in!), Tids for all the organising, PJ and Starboard SUP UK for the Ace GT and continual support, Andy@ H2pro  (Great 1st in the Double ski BTW!!) for the Hydration solutions, Tom Hurley for the press/cracking photos and Surf Steps for the travel and running expenses.

Lastly for the science minded, my GPS Data: